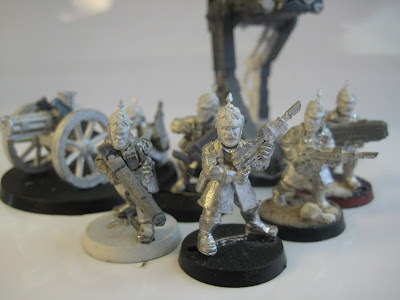 After receiving some pickelhaube heads from Curious Constructs I have started on a new small regiment.

Full fluff to follow but to give you an idea...

“The great questions of the day will not be settled by means of speeches and majority decisions but by iron and blood.”

"Where some states have an army, the Prutenian Army has a state!”

“The less people know about how sausages and laws are made, the better they'll sleep at night”

New officers for the meat works!

Having decided to kill off my officers in the style of Colonel Scipio's army I have made up various new officers to lead my men. As I fight battles I’ll give these guys names and background stories. I have only just started their painting but here is where I'm at:

As sighted in my previous battle post, I pulled some of my tanks out of the shed. The first 2 were a Demolisher and converted Hydra. 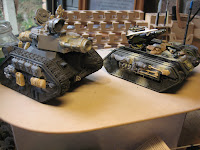 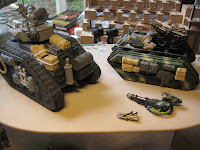 Some Finished Men!! (and some WIP) 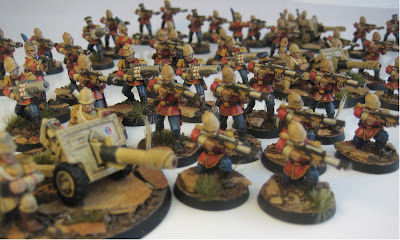 A few weeks ago I finally finished off some of my red coats and a few Lascannons. The hardest part was commandeering the camera to get some shots of them...
Read more »
Posted by Col. Ackland 6 comments:

2000p game. Killed everything. Lost nothing. Over by turn 4.

...and I really mean I lost nothing- not even one Guardsman fell.

The game was Guard verses the new Chaos Space Marines (of course), against my regular opponent.

The question is; am I just really good at playing Guard or is the new Chaos codex a bit poo? I suspect it’s a bit of both considering that I have played Guard pretty much non-stop for the last 15 years and also a few people have griped about the codex on the blogosphere.
(Edit: Or a third point, as people have pointed out in the comments, it was a lucky match-off of a Rock vs Scissors battle!)
I have a narrative battle report that will follow this post but I wanted to simply discuss the point first.
Read more »
Posted by Col. Ackland 15 comments:

No. It isn't a competition. But as a miniature hobbyist you might be looking at purchasing from one of these two (if not both) and if you are new to this niche in our hobby you might be interested in who these people are and how it is that their miniatures and conversion ‘bits’ are so similar but again so different! If you’re not new to either of these names you may be still interested in my thoughts and honest review of the products produced by these two little companies.
This is not a short review. I felt the need to do this properly which meant first exploring who these people are, how their stores developed, which then explain most of the differences between the miniatures.

The Ruins of Medusa V: The Incursion at Camp Exceller

The shortest game of 40k I have ever played, all over by turn 2!