The Ruins of Medusa V: The Action at Scourged Hill

Several weeks after the skirmish that became known as the engagement of “Vanquish Vally” a mixed patrol force were scouting an area nearby.
Read more »
Posted by Col. Ackland 4 comments:

The Ruins of Medusa V: The Engagement of Vanquish Vally

The ‘Fleet Regiment’ was holding a defensive position overlooking a forested valley to the west of Hive Perseus. Their two Earthshakers and three Heavy Mortars were ready to respond to any enemy that advanced on this flank although strategic analyses had suggested this was unlikely.  As the morning fog began to lift from the valley a Sergeant from the 3rd squad alerted the two lieutenants (Creswell and Reave) to the sound of cavalry approaching. Before either of them could ready the men, Colonel Ackland, commander of the 3rd Brigade- Macharian Thunder Guard, stormed into the camp with his horse frothing at the bit. He was accompanied by his mounted command squad and a further 10 veteran cavalry troopers. Lady Lieutenant Reave snapped a salute and called “Officer on parade…”  But she was curtly drowned out by the red faced Colonel - “Stand too; Chaos is here; Nurgle Marines, Commence Bombardment! Lieutenants! Fan the men out! Cover the Guns and Hold Fast!”

With a few of the Troths off my desk I thought it was about time to look at what else is going on.


So what have we got? Two Praetorian officers, a sergeant, walkers, some cavalry and a Queen.


Staring with the coolest stuff first- the cavalry!
I have been coming back to these off and on since I finished my first lot. It takes quite a bit of time just to get the horses ready and build the lances so I'm ok with their slow progress. 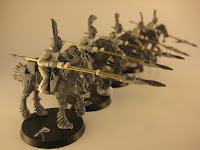 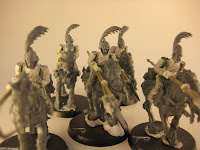 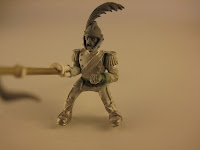 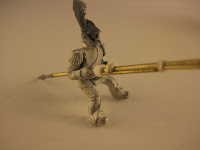 The Troth, also known as Homo Sapien Verdantus, are an officially recognized strain of Abhuman within the Imperium, endemic on the world of Verdant (Warhammer 40,000 6th Edition Rulebook pg.405).

As their name suggests, they have pledged an oath of fidelity to the Emperor and fulfil their duty to the Imperium whenever called.  Verdant was originally classified as a Death World, but through the tireless work of the Troths it now serves the Imperium as an Agri-World and Pleasure World (or Garden World). With a world of outstanding natural beauty, many Troths have dedicated their lives to pampering the important Imperial visitors they often receive. These are frequently members of major noble houses, members of the Navis Nobilite, Planetary Governors, important Ecclesiarchy officials like Confessors and Cardinals, Imperial Commanders, Rogue Traders and wealthy Chartist Captains. Other Troths pay the Imperial tithes by tending huge jungle crops or farms of edible fungus. Finally, like many colonised worlds and other abhuman races, the Troths also maintain a tithe of men to fight in the Imperial Guard, (or as humans jokingly refer to it, the Troth Imperial Garden).

I just hit 50 followers, wow what a milestone. To all my new blogger friends - Welcome!

I really love tracking down new blogs to follow. Blog networks are great for that but another way I find some real gems is by looking at what blogs other people follow.  With that in mind, I thought it would be cool to highlight my favourite 10 blogs and tell everyone why I like them.  This was way harder then I initially thought, but after a lot of cutting down, I have a list. I found that there were really two groups in my top ten - big well known blogs written by veteran bloggers that have a large following (heavy weights), and smaller less known blogs that are written by equally talented people but just haven’t been around as long or are less publicised (middle weights).

So without further ado, in no particular order, Col. Ackland’s favourite 10 blogs: 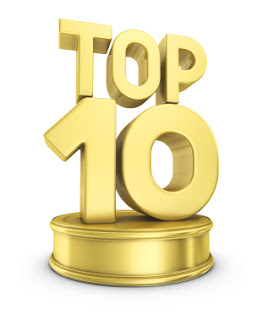