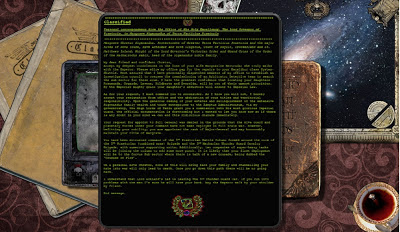 He placed the Dataslate on his desk and blankly looked off into the distance. His dead eyes were dry and scratchy from the lack of sleep. He imagined that any other man might sob given the tempest of feelings he had inside, but no - Margrave Chretzo Sigenandus had not been brought up to cry. Men of his breeding never cried, they were bread for action.
Read more »
Posted by Col. Ackland 7 comments:

The Ruins of Medusa V: The Issue of Inquisitor Sasppenny.

The situation was tense. Fifty of the Emperors beloved Blood Angel Space Marines surrounded the mixed Praetorian Guard force. Neither side had moved as they waited. Fifteen, twenty, then thirty minutes passed. The two ranking officers, Major Holtman and Colonel Ackland, exchanged knowing glances. Finally Ackland offered,
“I say, this is getting rather ridiculous. Hmm, Stand fast old boy, I’ll see to it.”
With that, Ackland marched out to a Blood Angel shielded in gleaming gold armour. After saluting he said
“My Lord Captain, Do you have orders?”
The Blood Angel Captain blankly stared down at the Colonel from his ornate battle mask. There was silence for a moment, then in a booming yet softly rounded voice the golden marine spoke,
“We are here, as are you, at the bidding of Inquisitor Virgil Sasppenny. We await His holy orders.”
“Yes Lord, but may I respectfully point out that the storm will soon descend on the planet again. If the Inquisitor has been waylaid we cannot stay here indefinitely. We engaged a traitor force on our journey here; it would be unfortunate if some ill fate had befallen the Inquisitor.”
There was silence, until finally the Blood Angel spoke again,
“Noted.”
Ackland tuned to march back to his fellow Praetorians, a sea of scarlet girt by blood red. He whispered to himself
“Sorry my good chap, but old Sasppenny won’t be giving out any execution orders today.”