I had made it to Warhammer World! Before telling the rest of this story though, I'll pause to show you the army properly. The photos from the battles are mostly from a distance with the army spread out in whatever formation I thought was tactically best for the mission. These army shots on the other hand give the full effect, which is well worth a look. I took these photos at the end of the weekend before packing up to go home. This was my first opportunity to step back and appreciate the army that I had worked so hard to finish.

Without further ado, I am pleased to present

The last few of The Blood Lion Crusade Army,
Commanded by Major-General Margrave Chretzo Sigenandus,
Marching under the banner of the Praetorian 5th Brigade,
The Pride of Praetoria. 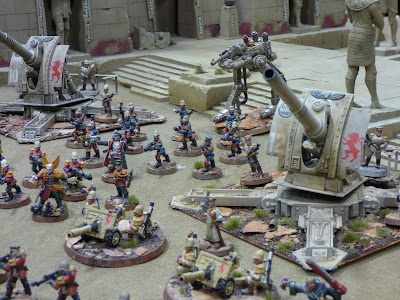 (Part 1 here)
[Please excuse my over use of Gifs. It was tough for me to write some of this out. Also sorry for the long post - I could not break this part of the story up. If you can make it to the end it is worth it!]

Our first few weeks in Sweden were hard. Nothing seemed to go to plan at all. Without all the details this was me: