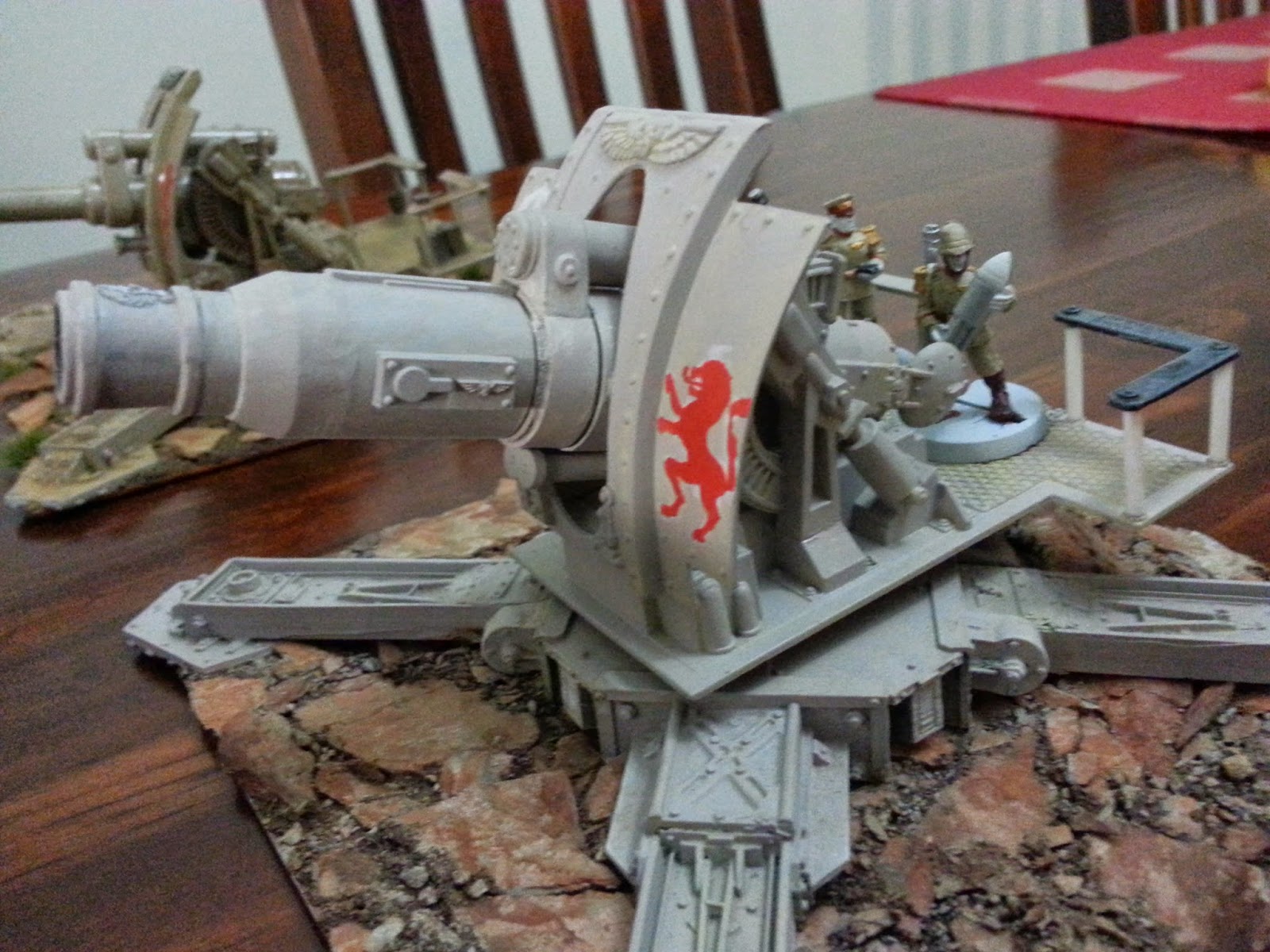 Here is another small project that happened between other things. I had two Earthshaker Platforms and I wanted one to be a Medusa Siege Gun. I had seen similar conversions on the net so I gave it a crack with some personal touches. I find it really useful seeing how other people attempt different conversions, so in that spirit here is a walk through of my conversion.

Windmill from ‘The Last Stand at Glazer’s Creek’ 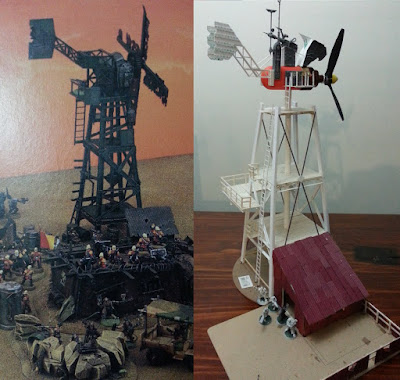 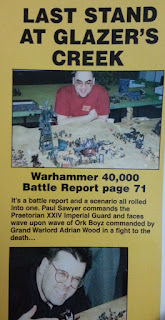 White Dwarf 222, of June 1998, featured a battle report adaptation of the Battle of Rorke's Drift - best known from the film ‘Zulu!’ Naturally, this pitted a platoon of the then newly released Praetorian Imperial Guard against a group of savage Orks who came at the Imperial defenders in a number of waves. I always loved this battle report for the way it leant on an historical event without making it a straight out recreation in 40k. The exaggeration and satire blended with the Gorkamorka vogue captivated me and even now, 18 years later, I enjoy flicking through that battle report.
Read more »
Posted by Col. Ackland 15 comments: 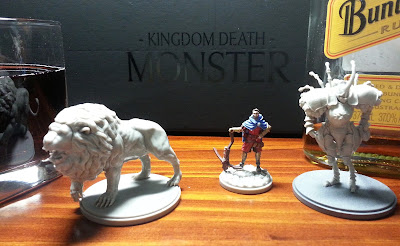 I have been off of the blog for a while but I had to throw up a quick post for this one! My copy of Kingdom Death: Monster arrived (finally) so I have been one happy man this weekend! First off, I know there are many people out there that are thinking of magnetising their survivor models. I gave it a go and with the right tools it isn't all that hard. 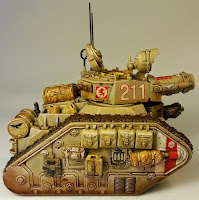 Gents, this one is a double blog post, so be sure to checkout the work in progress post for this tank here. As always, comments are always welcome. Seeing that the Preatorians were 'never' on campaign in the Orpheus Sector (thanks to the Ordo Redactus), it would be wise to check your security clearance before viewing these archives. -Tally ho lads, Colonel Ackland.

Painting Up The Old Demolisher! 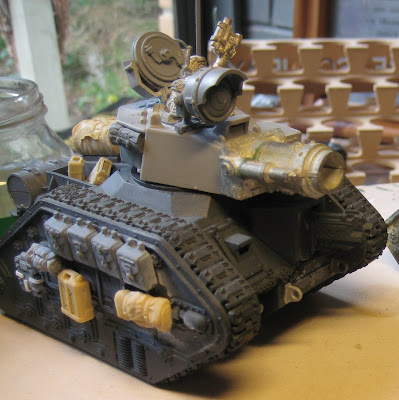 After handing up my PhD thesis (which I talked about in my last post) I gave writing a solid brake for a bit. This unintentionally spilled over to my blog too so I have gone a full month without a post. Now that I am back to writing at work I found the urge to write a post again. So what have I been up to? I finished a tank! I am splitting this one over two posts so if you would prefer to jump to the finished tank hop over to Part 2.
Read more »
Posted by Col. Ackland 10 comments: 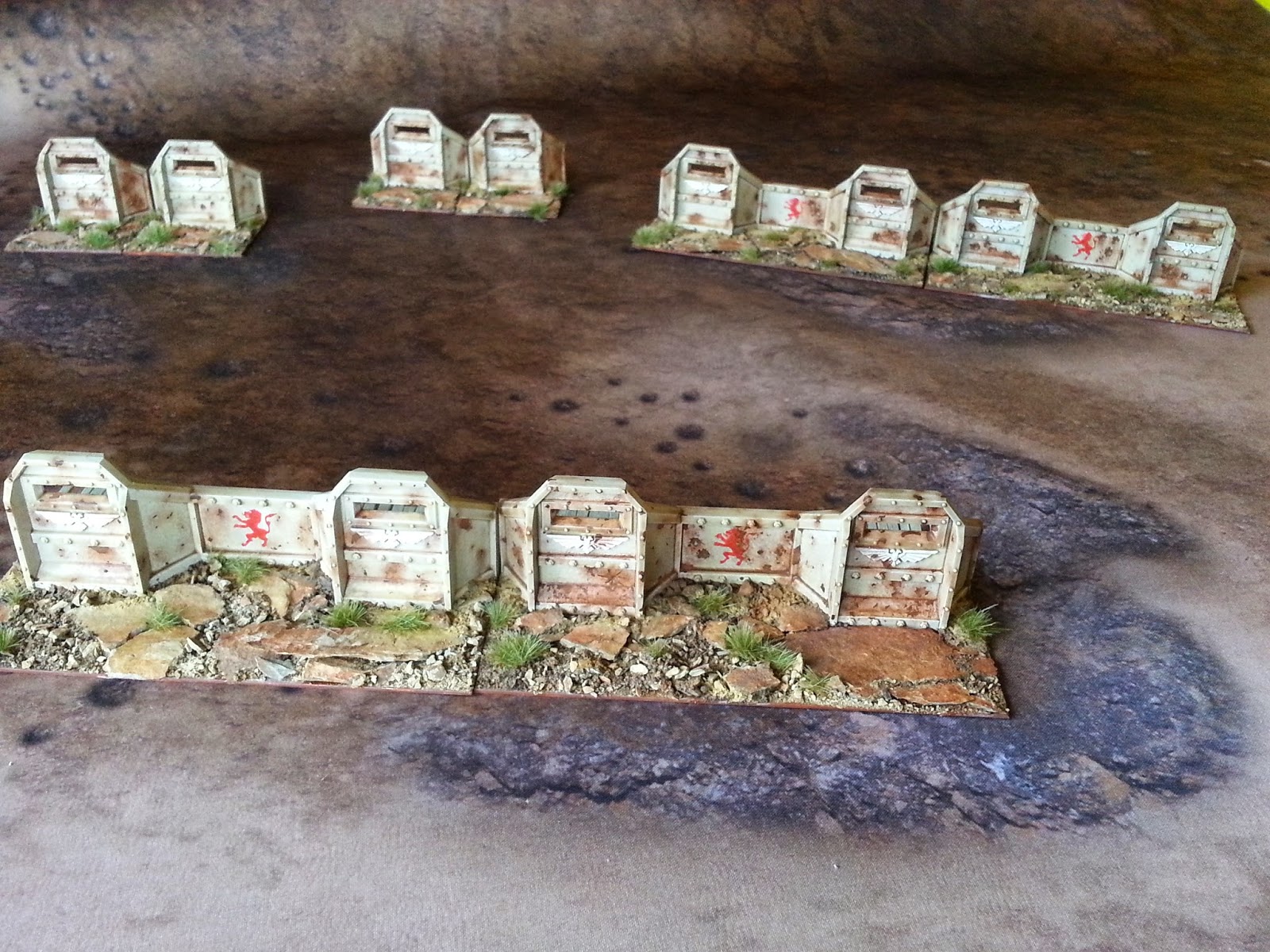 My blog has clicked over to 100,000 hits! Thank you to everyone that has stopped by over the last four years especially to all the great bloggers that have left comments from time to time!

In the real world I am submitting my PhD thesis over the next two weeks as well as working. As a result, my days are split between 10 hours of shiftwork, 8-10 hours of thesis writing and 3-5 hours of sleep. Thus, there is no modelling happening at the moment. I do have my finished defence lines to show off though! Here is where I had left them in the last post.
Read more »
Posted by Col. Ackland 14 comments: "Your spirit is the true shield!" 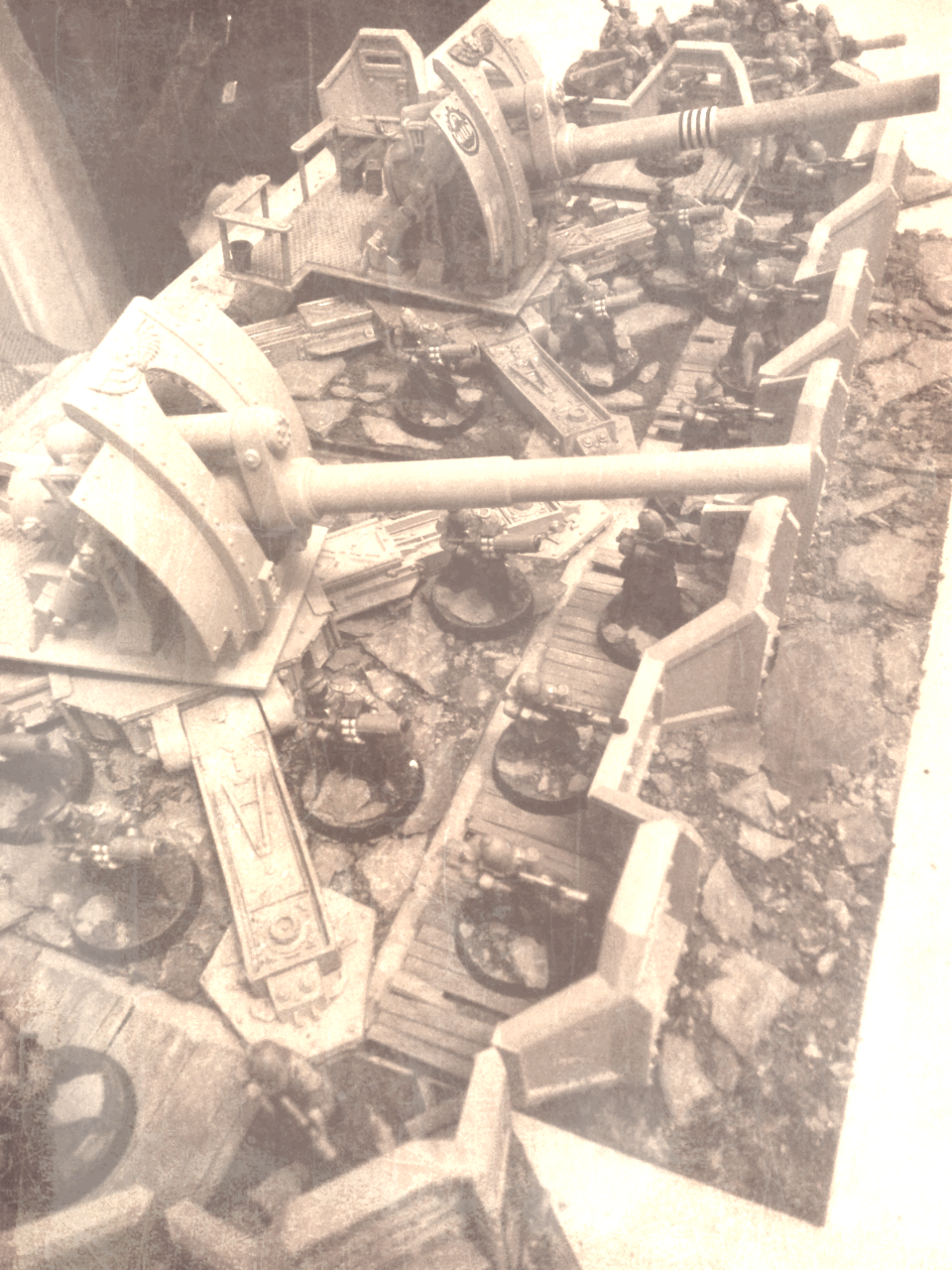 This post is about reinforcing the new army imagery that I introduced last post. To do this I have started painting up a defence line for the new campaign front in the Orpheus Sector, as well as the literal 'front' of painting lions on the front of things. [Don’t worry I’ll stop my bad attempts at being clever now.] My current progress is slightly ahead of my blogging so unfortunately I did not incorporate some of the advice that I received in my last post. Never the less, I got there in the end!
Read more »
Posted by Col. Ackland 11 comments:

Contextualising My Praetorians (and a Big Gun Emplacement) 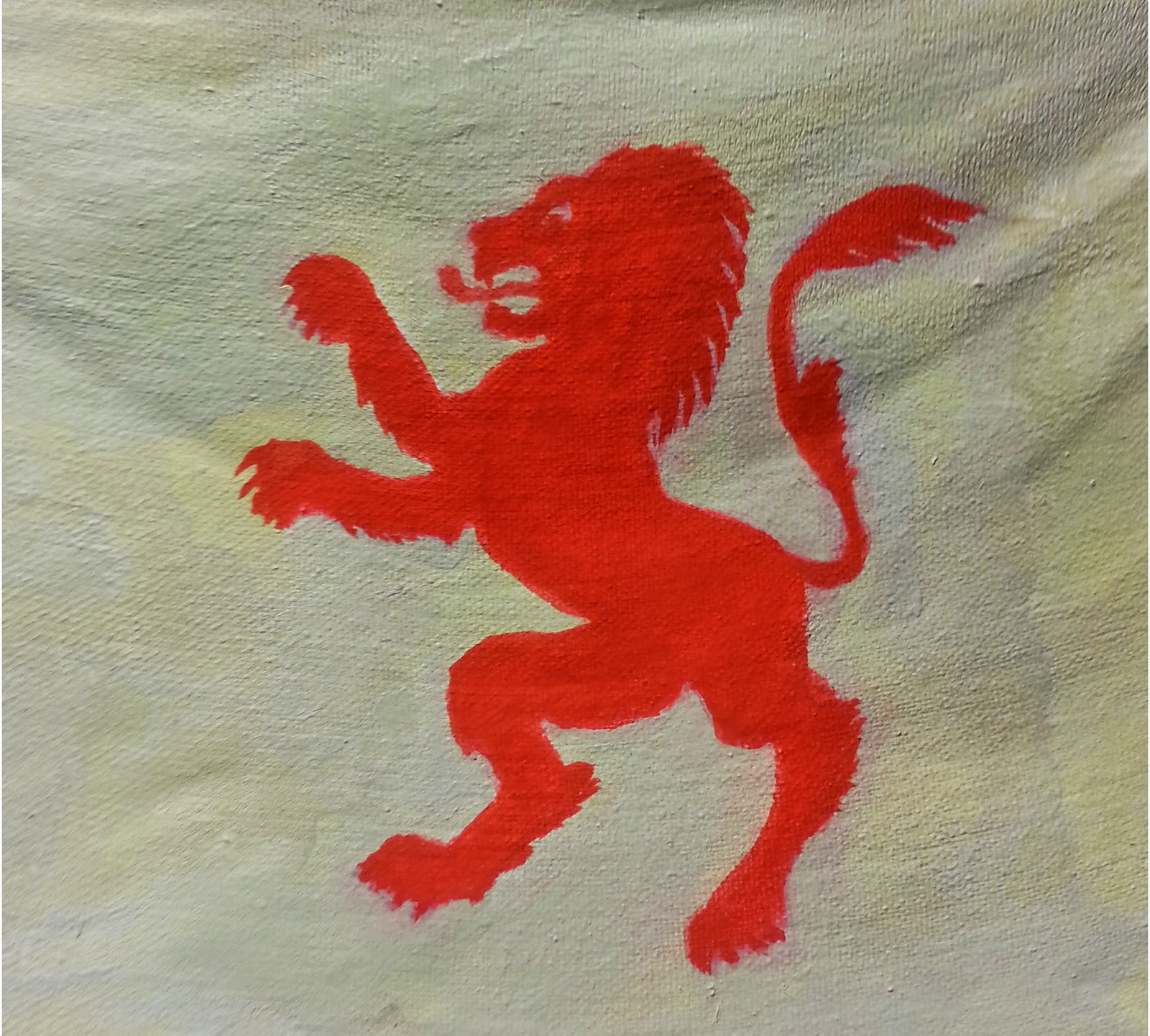 Well, it has been quite a break between solid painting posts. This blogging drought ends here! Starting this month I will attempt a feat that I have never achieved ever in my last 4 years of blogging... I will blog weekly painting posts. {gasp} I'm know right, a very dangerous deed! I don't know how long it will last but there will be no retreating!

In this post I painted up my Earthshaker Cannon, but what this post is really about is the symbols and icons that I have added to my Praetorian force. Lately, I have been putting large emphases on making sure that my armies have a strong identity. For my golden Necrons this has been through the elaborate city terrain that represents their crown world. Praetorians by themselves have a strong theme but I wanted to introduce a few icons to the army to cement their character and identity across the force.