The year started with my three gaming mates all speculating about what they were going to get painted this year. It was not long until this idle chatter escalated into formal painting pledges. Liam (Frothing Muppet) pledged a small horde of Orks which he has been making mad progress on over the last two months. He originally posted about it here, and followed up with progress posts here and here and here and here and here and here... well you get the picture, Muppet has done a lot! James (The Hobbyist) has also been cutting swaths through an Imperial Fist army. Unfortunately he is yet to blog his progress- we’ll have to give him a nudge. James has has shown off a really nice chaos bastion which is worth checking out though. Finally, our third mate Dale (yet to become a blogger) is working his way through some Raven Guard. Rightfully so, I have pledge some Praetorians. Our goals were self chosen and there seems to have been two different strategies at play. Liam and Dale have smaller pledges (around the 40 to 50 model mark) – aiming for realistically doable goals, while James and I have gone for hyper ambitious pledges (around the 100 model mark) to use the goal to really push ourselves. It is difficult to make comparisons between our goals and progress seeing that we are painting different miniatures, under different time constraints and are painting at different standards. It is also worth noting that Liam and Dale are probably better painters than James and I but that being said we all are pushing each other along.

My pledge was initially a very open '100 models'. Within this tanks would count as 10, walkers 5, heavy weapons 3 and infantry as 1. I then refined this to models that I could field in my standard 1500 point list. For fun, our progress is plotted on the graphs below. The axis on the left depicts the pledge percentage completed (plotted by the thick lines and circles) while the axis on the right shows the total model count (plotted by the thin lines and crosses). At the end of January we were all reasonably bunched with us all completing around 10 models.

However, that all changed in February as the other lads ploughed on with their painting any I stalled spending my time on the thesis. My progress so far has been one Earthshaker artillery platform and an Aegis defence line, so I am trailing on the pledge progress front. 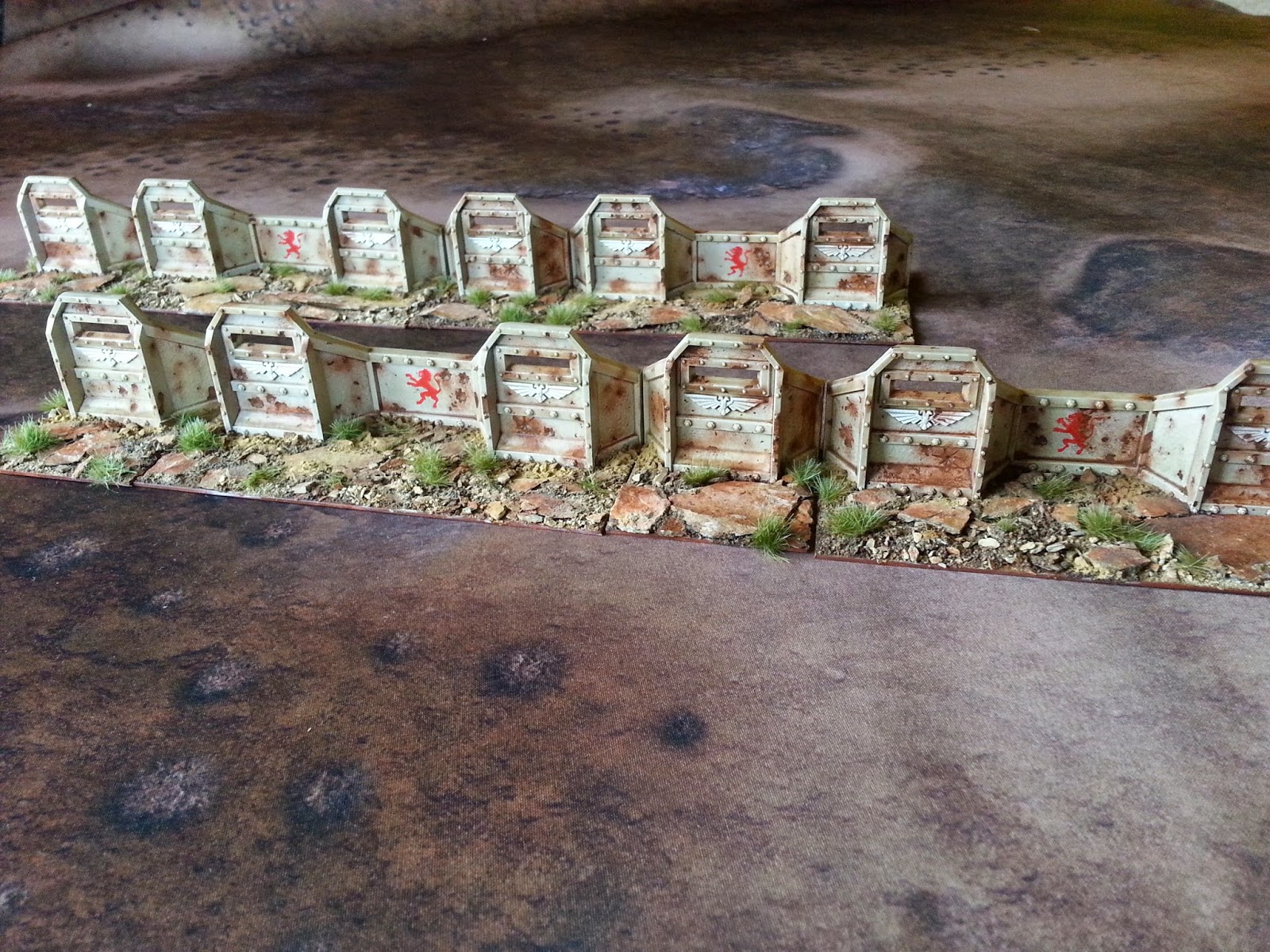 As for my recent painting, there really is not all that much to report. I have pulled out some men to crew my gun emplacements and a few gunners for another two lascannon squads. These guys are part my 122nd Regiment of Praetorian Artillery who wear tan uniforms rather than red jackets like my line regiments. I have laid down the basic colours and started the shading. 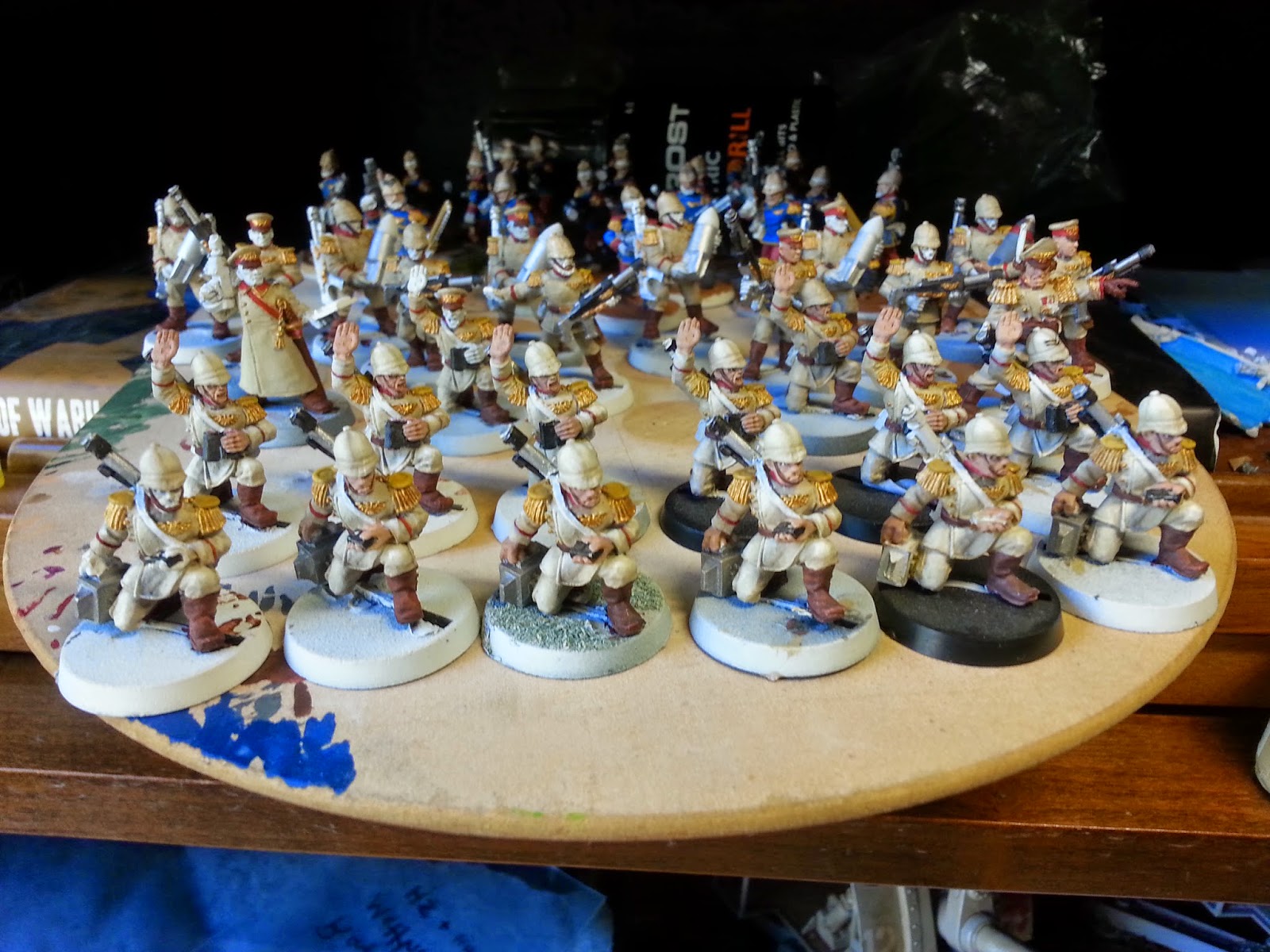 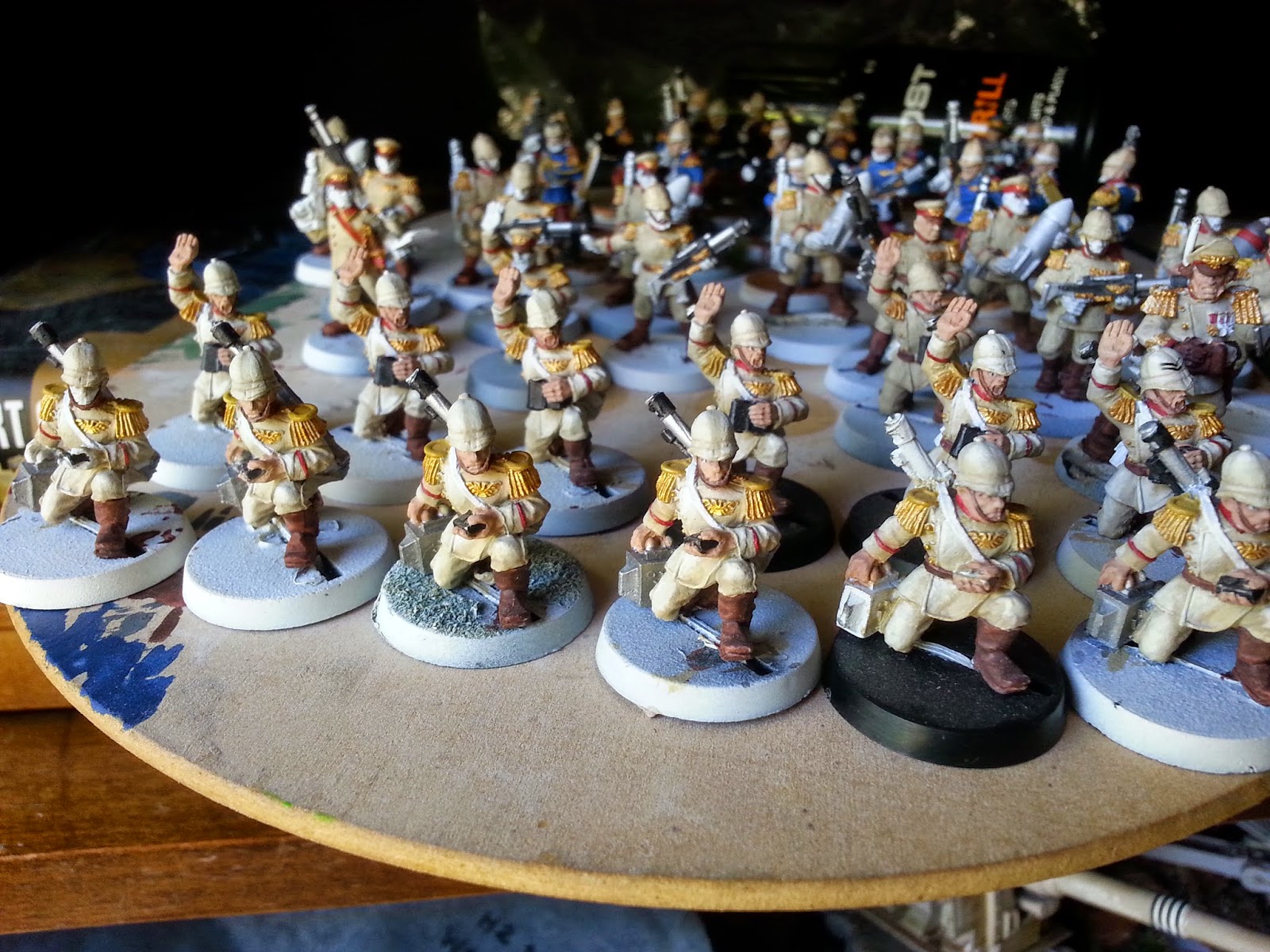 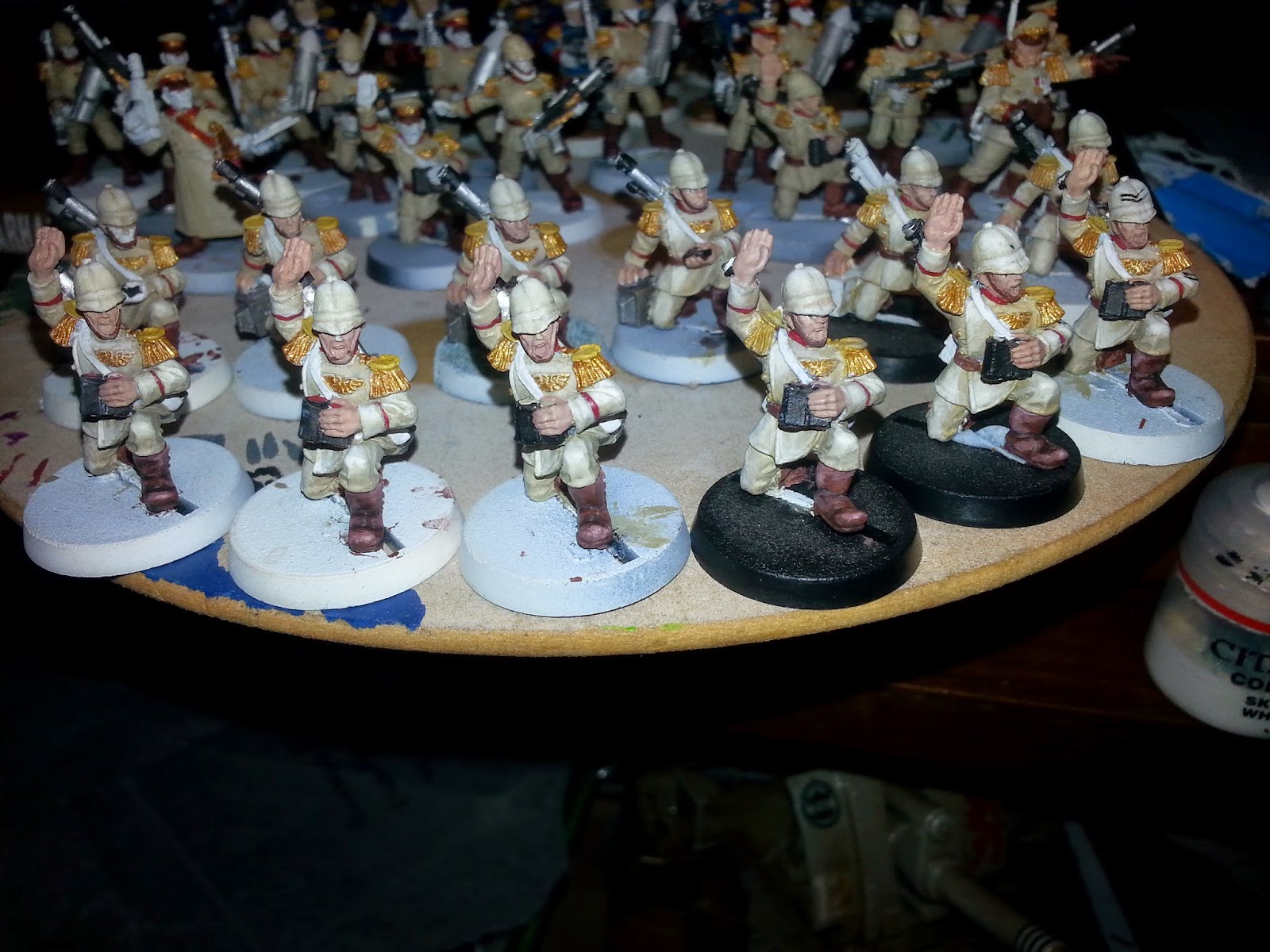 Currently I am stalling on making a decision on the guns. Originally I was painting a gun number on them, in the old 2nd / 3rd ed style. Although, now I'm toying with the idea of painting red lions on them to match my recent work. If the army were Cadians they would have their Cadian Gate emblem plastered on everything so I feel I should go with the red lion. I’d better make a choice soon so suggestions are welcome!! 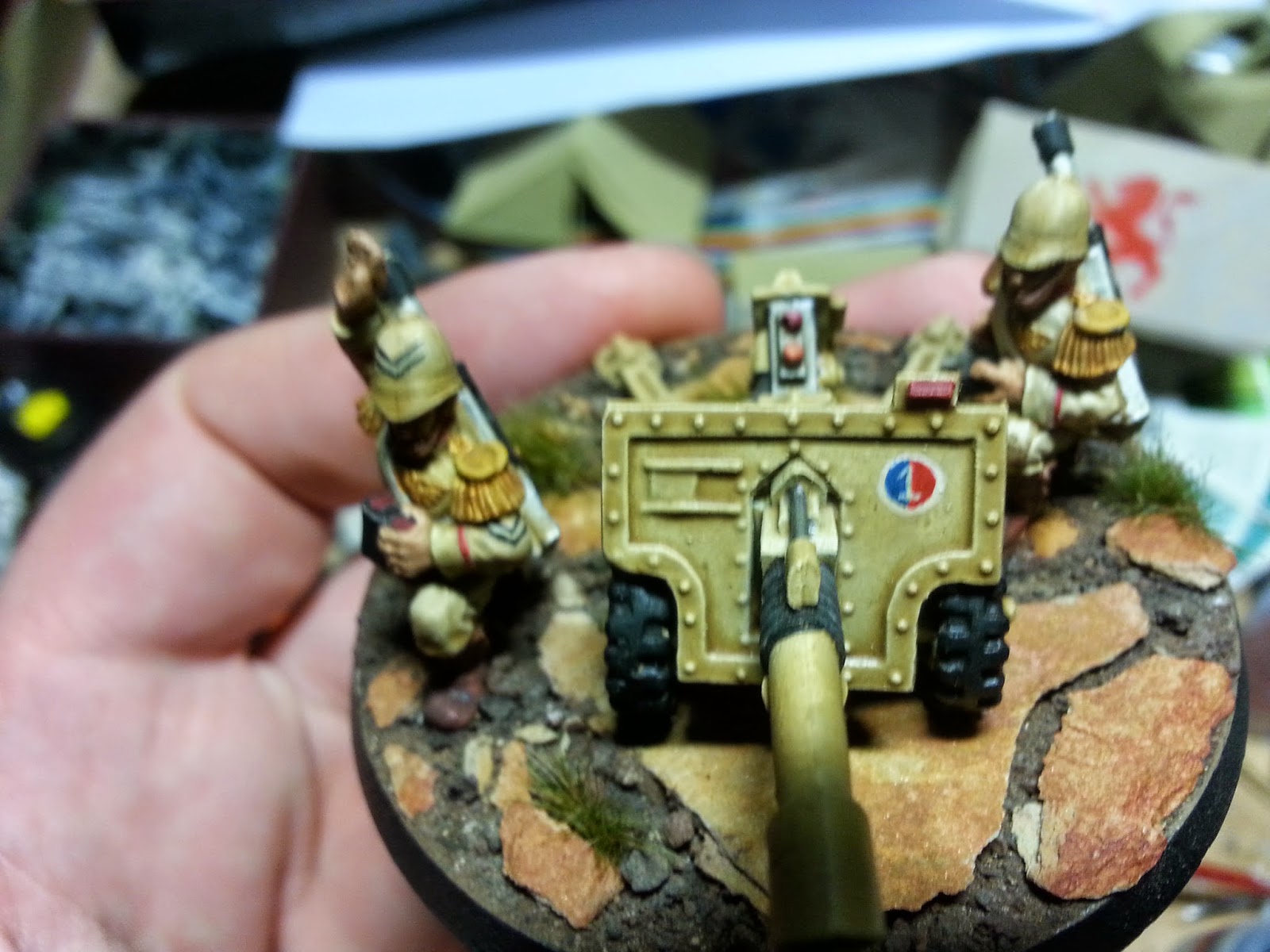 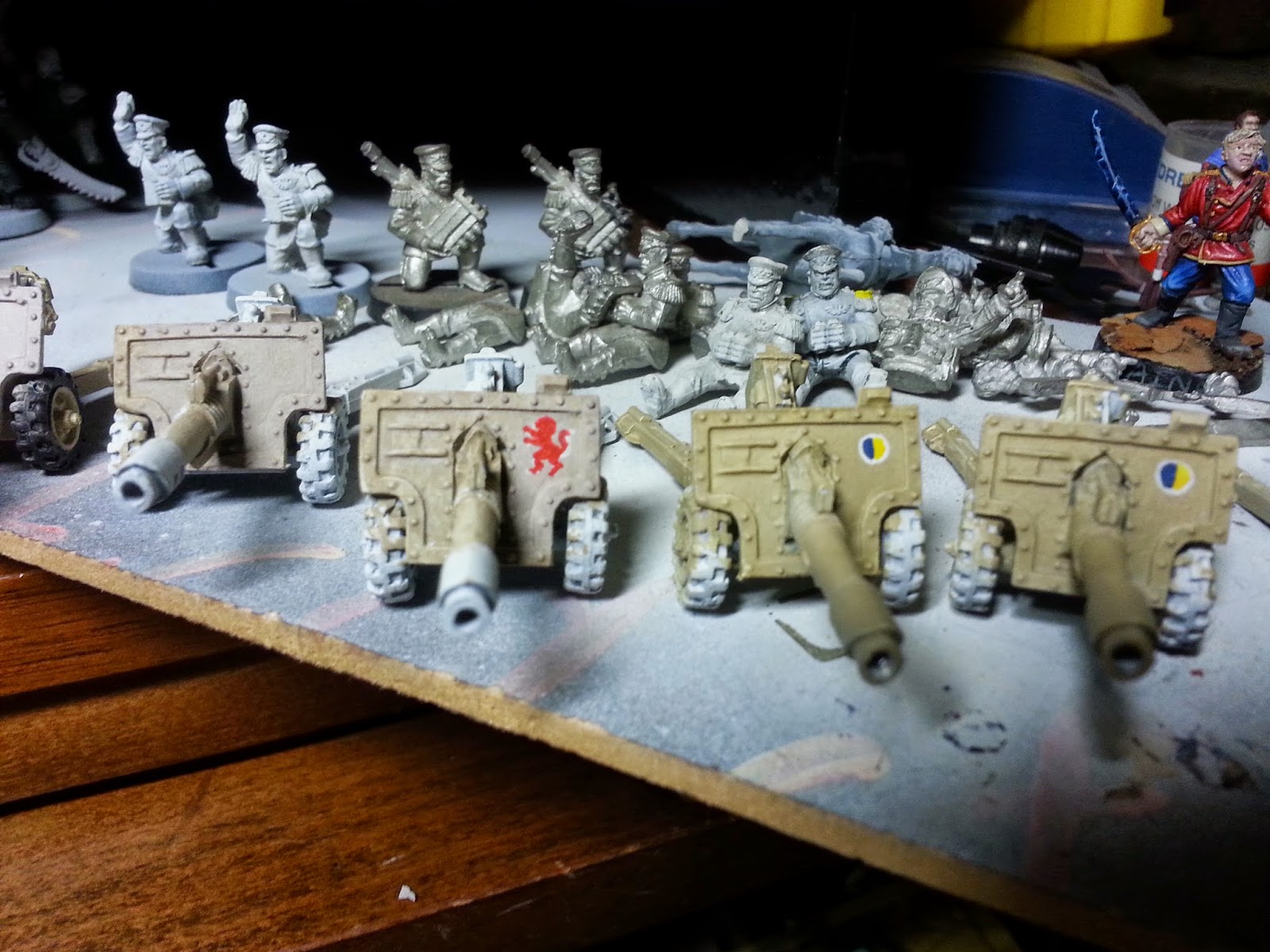