"Ahoy matey! As you may have heard I'm coming back to Oz soon (tomorrow in fact), I was thinking that we should have a proper game of 40k, my Krieg v. your Praetorians. What do you think?"
Alistär Ian von Cämpbell

And so the stage was set for the ultimate smack down.   Krieg v. Praetoria.  2500p. We rolled a 'Dawn of War Deployment' and 'Purge the Alien' mission - so no objectives to seize, just Kill Points to earn.

... a battle to definitively end all debate on who are the best Imperial Guardsmen in the Imperium.


[I didn't have the time for a proper write up but this should give you an idea of how it all went.]

Exercise Hell Storm; a training exercise between the two Guard forces. Apparently someone high in the Departmento Munitorum wanted to test the newly commissioned Major-General Sigenandus and they decided that Colonel Tyborc and his 261st (Krieg) Siege Regiment were the force to do it.

The Major-General wanted to show that Praetorians know how to conduct siege warfare and so drew up a  force heavily supported by his 122nd  Praetorian artillery regiment. Captain McQuirter was up for promotion so he was the natural choice to lead the artillery contingent. From the 40th Line Reg the two trusted platoon commander’s, Lieutenants Caine and Brodhurst, were included to 'taker the fight to the enemy'. And finally, against orders, Col. Ackland assigned himself and a few riders to the formation - although in his cavalier manner he didn't take any of it seriously at all.

Fresh from a string of numerous campaigns, sporting awards, medals, trophies and newly painted kill markings, the Kriegs did their best to intimidate. The Praetorians however, looked on their Krieg brethren and remarked that arriving to a battlefield (and especially an exercise) in dirty uniforms was a display of poor soldiery. Of course this didn't sit well with the stoic men of the 261st Krieg, and so began the siege.


There were also 2 feet more of the table not shown in both photos! Coincidentally the right flanks of both sides were wiped out in turn one. 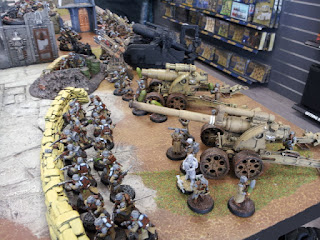 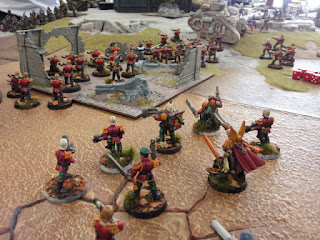 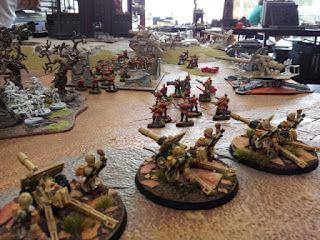 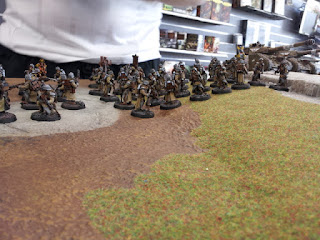 The Krieg, moments before dummy shells and 'training level' Las fire take them out of the exercise... 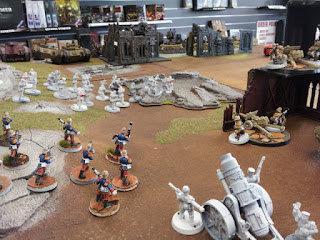 ...then in response the Krieg remove a Praetorian platoon (the unpainted group at the front). 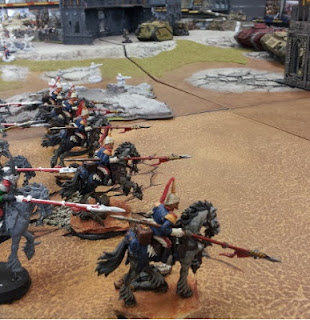 The heroic, although ultimately pointless, cavalry charge across no man's land.

I could have chosen to use the cavalry more wisely but I really thought that this would be more cineramic. They actually made it to 10 inches from the enemy lines and in the assault roll I rolled a 6 then a 4! But we remeasured it and it was 1mm over 10 inches so I would have needed an 11!


-Bombard on it's last legs and interceptor quad-gun desperately trying to take down my Vendetta before it is destroyed itself. 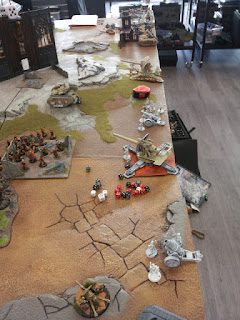 ... and the scattered remains of the Praetorians. Manticore's emptied but two Earthshakers and Heavy Mortars still pounding away.

In the centre behind the destroyed Demolisher you can just see Lt Caine sheltering from the unrelenting artillery barrage. This was yet another game in which his command squad was killed off and he continued to run around by himself looking for enemy squads to finish off!

Other important moments were:
- Early in the game Alistair's Bombard dropped a big 7 inch template in the only part of my deployment area that had no one in it!
- A lucky early shot from Alistair's Medusa exploded my 3 hull point strong Manticore.
- My Vendetta avoided Alistair's Quad-gun's anti-air fire for long enough to shoot down the Red Baron von Flasheart (thunderbolt) with the help of my Hydra.
- Alistair's Hades Breaching Drill failed to arrive from underneath my second Manticore in three consecutive turns because it kept scattering off the board.
- Alistair's Krieg managed to take out my wounded Demolisher with a lucky crack grenade.
and there were many other moments of cheering and gasps too!

Amazingly no units fell back at any time and there were no close combats (apart from the assault on my demolisher) - the battle was entirely barrage and direct fire! 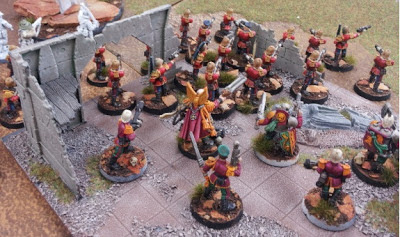 After both sides dished out a ridiculous amount of ordnance and displayed immense courage and tenacity the commanders ended it with a hand shake and called it a draw.

Naturally the Praetorians were winning when the decision was made to end the exercise, but as Sigenandus later mentioned to Ackland "Best to end it at a point of mutual respect - just quietly, it looks like we are heading off to war alongside these chaps very soon, so we may need them to watch our backs."

-As we packed up, our friendlily GW staff dude told us about the in-store doubles tournament next month. I'm really really busy right now, but I'm praying that I can find the time to deploy Death Korps & Praetorians side by side.

N.B. Captain McQuirter did receive his promotion so he is now Major McQuirter of the 122nd Regiment of Praetorian Artillery.