Revitalising my hobby: Part 1 Rules for a Campaign

The thing about having regular gaming buddies is that they requires you to game with them regularly.  It is very easy to keep putting other things first and continuously put games off. If you keep doing this eventually you find yourself with no gaming partners. Of course you can pop down to your local GW or club and try and get a game in, but A) there is no certainty that you will find someone and B) that someone may or may not be a person that will give you the sort of fun game that you are looking for. So I have decided that even though things are very busy right now, I will specifically put time aside to game and seek out other gamers like me who like fluffy battles and fun games rather then tournament uber-list building and two dimensional battles.

My last Game with Alistair's Kriegs was an example of this thinking. We have known each other for years but never got a in a proper game. Then, just like that, when I said 'OK I'll make it happen' it did! We were also going to enter a doubles tournament together at our local GW, though unfortunately they wouldn't allow DKoK lists or any FW stuff so that meant that Alistair was out. Not to worry though, I'm sure there will be more opportunities in the future!

With my regular gaming buddy (James) we have wanted to do a campaign for ages as well. Nothing too complicated but just a story and some rules that will link our games. So I rang him up last month and said 'Lets do it!'
We committed ourself to a game at the end of every month. This would mean that each month we could come up with our list for the next game and spend time getting any new models ready. We both are woeful at painting up armies so this might get us better motivated!

Along with the commitment for a monthly game I came up with some extra rules for the campaign which James also loves. 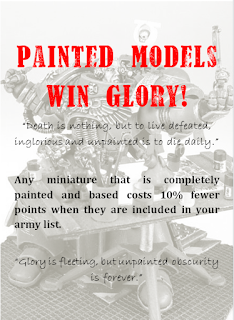 Originally this was 5% less but then we changed it to 10% because it is easier to use and a bigger incentive to paint! It works exactly as it sounds, write your list and every painted model included gives you additional points to use. So if an entire 2000p army was fully painted you would get and additional 200p to spend on extra models or equipment. 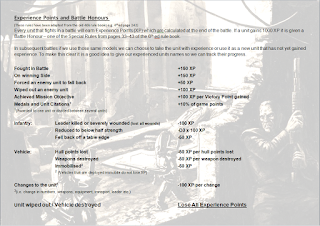 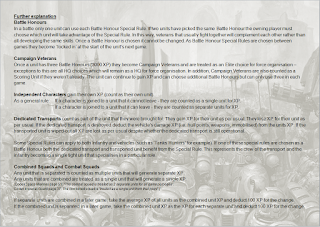 I use to love these rules from the 3rd and 4th ed rule books but I never got to use them with anyone. I rewrote them with some tweaks and here they are! They have gone through two rewrites so far and we will see how they go in our first game at the end of the month.

Lastly, I have also been writing some fluff for the campaign. Its not quite worked out yet but here is an exert about the planet that we will fight over. 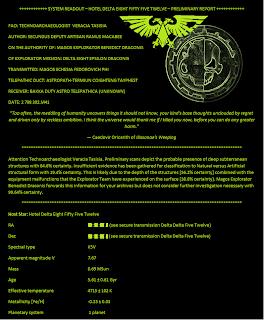 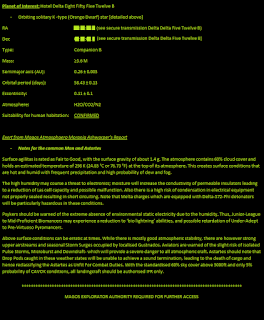 Surface agilitas is rated as Fair to Good, with the surface gravity of about 1.4 g. The atmosphere contains 60% cloud cover and holds an estimated temperature of 298 K (24.85 °C or 76.73 °F) at the top of its atmosphere. This creates surface conditions that are hot and humid with frequent precipitation and high probability of dew and fog.

The high humidity may course a threat to electronics; moisture will increase the conductivity of permeable insulators leading to a reduction of Las cell capacity and possible malfunction. Also there is a high risk of condensation in electrical equipment not properly sealed resulting in short circuiting. Note that Melta charges which are equipped with Delta-572-Phi detonators will be particularly hazardous in these conditions.

Psykers should be warned of the extreme absence of environmental static electricity due to the humidity. Thus, Junior-League to Mid-Proficient Biomancers may experience a reduction to ‘bio lightning’ abilities, and possible retardation of Under-Adept to Pre-Virtuoso Pyromancers.

My next post will feature a few of the new units that I have put together for the campaign. Until then I'm looking forward to going through the backlog of all of your blogs to check out what I have missed while I have been absent.
Cheers!
Posted by Col. Ackland